« I don’t think art can stand up to nature. Put the best object you know next to Grand Canyon, Niagara fall, the red woods. The big things always win».

Behind this sentence is enclosed a significant part of the philosophy of the artist Walter De Maria (October 1, 1935 – July 25, 2013). Remembered as a leading protagonist of the American art scene of the ‘60s ‘70s, he was forerunner of artistic trends such as Minimal Art and Conceptual Art.

The Land Art, or Earth Art, is a movement born around 1967-68 that used the natural landscape to create site-specific structures, art forms, and sculptures.  Having had, among the main objectives, the aim to deprive the artwork from the market, the Earth Art practice refused traditional gallery and museum spaces. 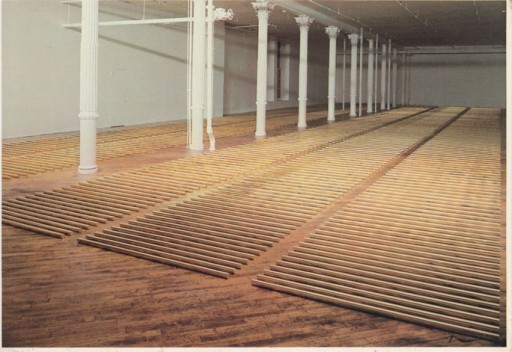 The artist preferred materials extracted directly from nature such as stones, tree, water, gravel and promoted the temporal duration and eventual disintegration of their works.

Breaking the boundaries of the art gallery, Mile Long Drawing artwork consisted of two parallel lines drawn with chalk extended for one mile in the Mojave Desert in California.

Born to be destroyed, the installation challenged the art market and the sacredness of the artwork. The wide landscape became the only “canvas” the artist was confronted with. 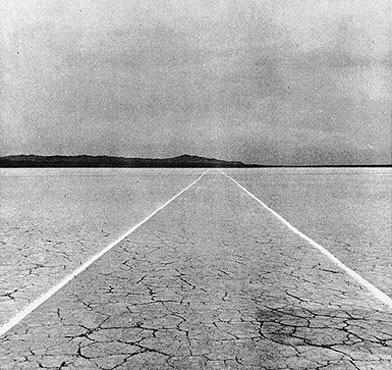 De Maria shed light on the delicate relation between nature and mankind in which the latter has tried to make sense at the external world through ”natural” category like space, time, order and measurement. In this respect the viewer was called to meditate.

Ultimately, the perishability of the white lines, destined to disappear through time, reflected the transience of the life.

In this monumental installation placed in a remote corner of New Mexico desert the artist seeks the complicity of nature to assemble an ever amazing event: a thunder storm.

The work consists of 400 stainless steel posts arranged in a calculated grid over an area of 1 mile × 1 km. The natural environmental is not a merely site for the artistic matter but the authentic leading actor.

The locale was scouted precisely for its distance from other signs of human development and its ability to reflect the enormity of the landscape. During the storm, the steel posts gather and multiply the power of lightning at the service of a magnificent spectacle of light. 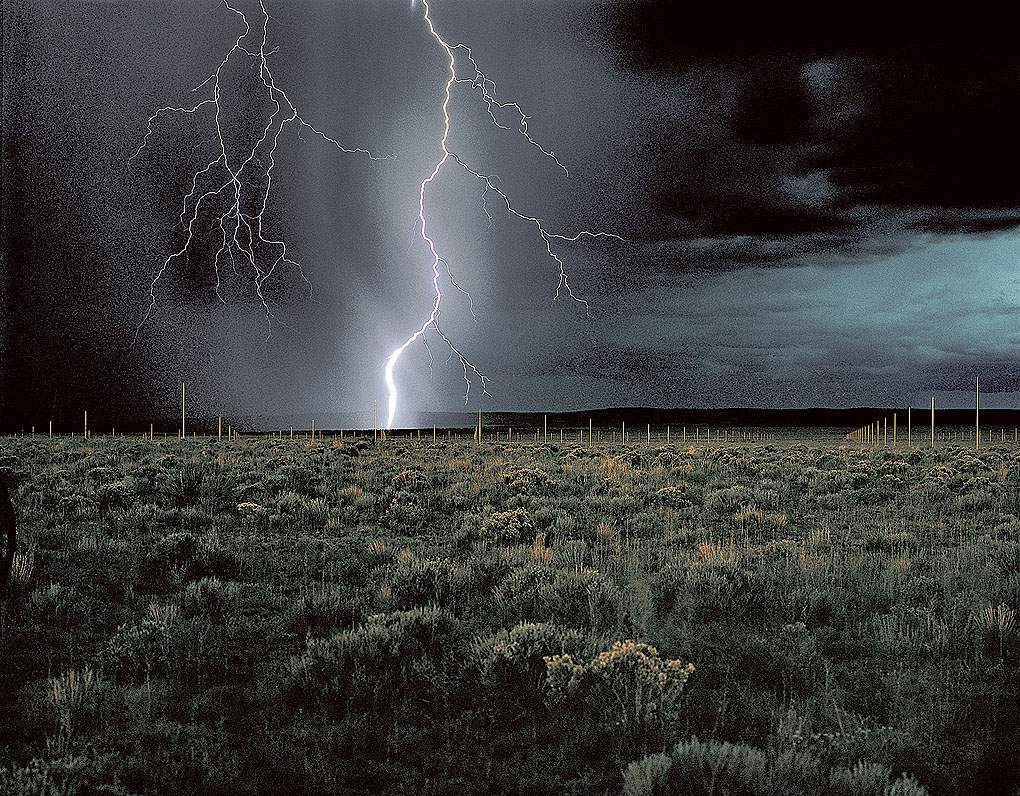 The title draws attention to the surrounding landscape and to the relationship between art and nature. The earth is an integral part of the artwork and acts as a canvas while also underlining the sky as part of the larger environment, and our relationship to it. Visitors must travel to this remote location in order to view the work, therefore incorporating the journey away from the everyday as part of the experience of the piece, which initiates a total immersion of the senses while creating an unusual degree of intimate encounter with a liberating spirit.

Ultimately, among the multiple meanings, The Lightning Field  is a romantic vision of nature that uses modern tools.

After all, De Maria admitted that in his works there are “at least ten meanings” but, undoubtedly, his environmental awareness was often the base of his researches. The artist stressed that the work of art is intended to make the viewer think about the earth and its relationship to the universe.

Indisputably De Maria, died in 2013, helped establish Earthworks and Land Art as important modes of creative practices for contemporary art, not simply calling attention to the environment, but physically placing viewers and immersing them in it.