Feel Festival, an example of sustainability?

You may have already started to think about your daily carbon footprint, and even about replacing disposable items by long-term options. But have you ever thought about the footprint of the festivals? When summer arrives, a lot of cities hold at least one during the hot season, offering some  attractive plans to enjoy the holidays to (not only) young people. According to some studies (Creative Carbon Scotland), during summer festivals every person significantly increases the waste per day compared to what it is produced at home or work. At the same time the diesel consumption for powering stages and installations grows as well. But is it possible to counter these side aspects and enjoy music in a sustainable way? From last years, the organisers are trying to find a way.

From 6th to 9th July, together with Lisa (EVS volunteer) and 5 members of NFJD (German Young Naturefriends), we attended the Feel festival in Germany to represent IYNF and NFJD altogether.  This festival takes place in the surroundings of the lake Bergheider, artificially flooded from a former mining pit. That offered an intriguing environment, with a huge mining engine dominating the back in the landscape, and a still developing nature around the forming lake.

On the festival’s website, there was a special section for sustainability claiming  for the pledge to protect nature areas. Other actions aiming to be more environmentally friendly in terms of food, waste and transport were also pointed it out.  Furthermore, we were invited as part of the crew in charge of running activities dealing with these topics. Hence, we organised an Eco-Geocaching tour in the festival area that allowed participants to learn some facts about the footprint of the festival, with stops in the kiosk, the eco-toilets, the waste area and the lake. NFJD members also delivered a workshop about how to organise sustainable festivals and other workshop focused on how to prepare  “seedbombs”, balls made up of a mix of compost, clay and flower seeds.

So, how sustainable was in reality the Feel festival? In order to conclude more precisely, 5 different aspects have been  reviewed: transport, food and drink, waste and energy.

When talking about transport we should take into account attendees, artists and staff, but also the  shipping of provisions and materials. How the artists, staff and materials are transported is usually not known, and it has also been the case of the Feel festival, with no information on the topic being provided on the festival website. Regarding the attendees, good intentions trying to promote alternative forms of travel, like biking from Berlin (with separate baggage transportation), buses from the main closest cities or carpool were encouraged.

Some ideas to improve travel for next editions could be to offer the possibility to offset the carbon footprint on the festival website or paying some “tax” if travelling  solo. Other similar festivals are also offering some advantage for the people sharing car when travelling to the venue.

To sum it up, the transport policy resembles  still a bunch of good intentions rather than an established objective of the festival to decrease the ecological footprint of the travels. 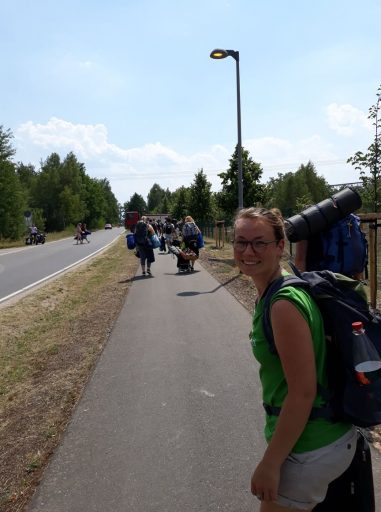 Regarding food, there were also a lot of eco-friendly measures pointed out on the website, such as local suppliers (whenever possible), a food market selling only ethically conscious fair trade products and many vegetarian and vegan dishes. It is always hard to verify if every store was truly selling local products, so let’s hope the organisers were taking this into account when selecting the sellers.

Even if we saw more eco-friendly containers for food, there were still a lot of plastic disposable cups and dishes. The same was true for  drinks, with a lot of plastic bottles for sale as well brought by attendees. The number of water refill stations was quite low, and no measure encouraging people to take their own reusable bottles and cutlery were taken.

In order to improve these aspects, a system of deposit could be also used for food containers or using compostable disposables serveware. And to be even more sustainable and to really reduce the carbon footprint, why not propose only vegan food? After all, it would be only four days without eating meat and animal products, a challenge everyone could face!

This was one of the most disappointing aspects of the festival, specially taking into account that it is one of the aspect that accounts the most on carbon footprint. After the Feel festival crew claiming on their website that they were awarded last year for being the only festival in Germany having eco-toilets, we discovered that those weren’t everywhere, but just combined with normal paid ones  and the standard portable toilets. Furthermore, even if there were signs indicating different kind of litter bins, no real containers to recycle were available. The only measure taken was giving a plastic trash bag to attendees that they should bring back when leaving in exchange for a deposit. There were also volunteers from the festival picking up trash, but still without any kind of recycling. As anecdote, we could find earplugs, camping materials, and other items completely fossilized from the previous editions of the festival.

In terms of the waste produced by selling drinks, even when  a system of deposit for cups and glass bottles was proposed, it wasn’t easy to follow. The reason  was that not all the selling stands were giving back the deposit for cups or bottles, which in reality turned out in a lot of people throwing their cups/bottles away.

Regarding other kind of waste, like food, there was  a “food sharing” stand, where people could bring food they didn’t need anymore. For next year, it could be also useful a sharing stand for other kind of items.

Other aspect that could also be improved are the items sold in the kiosk of the festival, all packaged in plastic. More eco-friendly options could be proposed, like solid soaps and shampoos and bamboo toothbrushes.

In conclusion, the Feel festival is still far to be a waste-efficient festival. 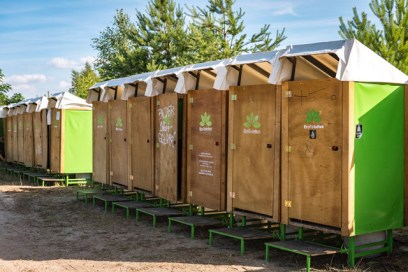 Almost as part of the festival area there was a solar plant station. However, the energy used in the festival wasn’t coming from renewable energy, but instead from diesel generators. It is important to remember, that the powering of stages is one of the most pollutant aspect in festivals.

Other point that could be improved were the showers, with the heated ones being the only option available. More environmentally friendly options such as showers with cold water or water heated by sun weren’t proposed. The same was with phone charge areas, where solar power could have been used, or encourage attendees to bring their own solar power phone charger.

Thus, regarding this point, the festival wasn’t enough sustainable either.

To conclude, the Feel festival has still a lot of work ahead to become a fully sustainable festival, but at least there are starting to think in strategies and seem open to include new measures in next years.