From Zero to Hero- Reflections from EVS volunteer Esma

18th August was a special day which was the day of the beginning of the 2 week-activity From Zero to Hero in Srebrenica. A group of young people from different countries met there from different countries to develop their project ideas, to learn about the community and also to implement what did they learn during the activity when they went back home with local people to help them.

To reach Srebrenica was not easy but after 15 days living there, leaving from there also was difficult. I am saying ‘’living’’ because the feeling what the surrounds gave to us was so special. It made me feel like I am at home.

One of the funny moments which I remember was trying to speak Bosnian with the driver even on the phone! My expression was like this ‘‘Esma,spreman dođite’ (ready, come) and after 5 mins he was at the meeting point, it means I succeeded to speak Bosnian!!  After we started traveling from Sarajevo to Srebrenica I’ve realized that the driver was as much fun as the situation. I’ve learned more Bosnian words on the way.

Delicious Pita was waiting for us.

The workcamp ‘From Zero to Hero’ was constructed to learn and to develop the participants’ project ideas in rural areas with local people.

The activity started with a game for learning the names and nobody had difficulty learning the names of the other participants; team-spirit was great!  The first few days we worked on getting to know more about ‘community development’ and ‘local development’. At the workshop- the theater of the oppressed – we worked on our perspective for some events occurring in society and how to make it correct these incidents. Another workshop -Storytelling- gave us freedom, creativity, teamwork, time management, and diversity. The most inspiring moment was after the storytelling workshop because it gave us space to be more open and see each other’s weaknesses. The small things that we had in our hands helped to reveal our feelings and to share powerful stories with the group. We were able to see our force in the pain that we have had through in our pasts. Once again, I understood how to listen to someone without asking, to share the pain of her/him, to share my own feelings with someone.

After these great and funny workshops, we faced the history of Srebrenica. To watch the documentary and to visit memorial were one of the most painful moments but also to understand the reality of what people lived in that land. The story of Azir who guided us affected me.

When the war started, he was 10 years old. In the war, they separated women and children from men. Men who were fitting as age were going to the war. Azir was also supposed to join the war. But then he managed to go with his mother. He hiked for 3-4 days to survive; It was the most dangerous part for him. He succeeded it.  When the war was over, he came back to Srebrenica. Now he is a guide in the memorial in Srebrenica, telling about the war, and about his experience.

I guess it was the beginning of understanding local people further and listening to their stories with our hearts.

It was the moment I questioned humanity and how to be a human once again.

It was the day when the ‘why‘ question echoed most in my mind.

The activity continued with helping to build a wooden house in Srebrenica. The person who is the founder of the local Naturefriends group in Srebrenica is building this house and saying that he could not live his childhood because of the war has a dream and he is explaining his dream with these words ‘children will play and run around this Naturefriend house’. 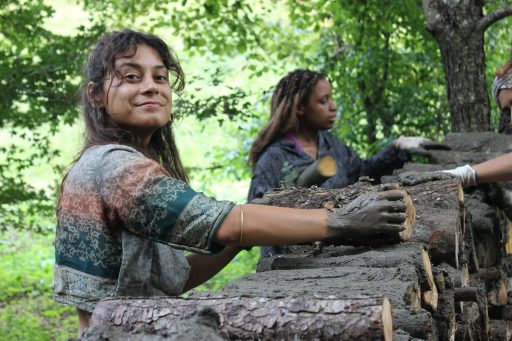 The trainers educated the participants via non-formal education about community development, project management, and volunteering development. The participants were inspired to come up with ideas to apply in their local communities back in where they lived.

The participants had two days to develop ideas on helping the local community. This part of the activity ended with a successful ‘Clean-up Srebrenica’, ‘Helping mothers’ and the third group prepared some activities for children. ‘Helping mothers’ group worked with NGO EMMAUS -it is an NGO with a branch in Srebrenica-. End of the day 3 groups shared their experiences via video, photos and telling the stories that they had during the action.

In the last days of the activity, the group focused on the e-manual. We worked as a group for each part of the e-manual and we created it, but our work is not finished yet! When the participants will implement their project in their home, the outputs of the project will be added to the e-manual.

I am so happy that I joined this full activity. It reminds me that we can be from different roots, different cultures, but the important thing is to stay in solidarity.

Ps. One Bosnian proverb says ‘polako polako’.  (but do not say it quickly you should say it slowly as so as the meaning.)