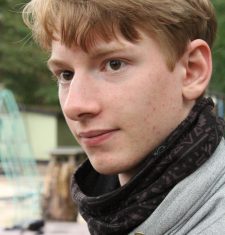 I was born in the city of  Frankfurt am Main in Germany. The Naturefriends were a big part of my life early on.  My first memory going there is the yearly apple festival at the Naturefriendhouse Niederrad, where you can make your own apple juice and enjoy some apple-themed games. Presumably hooked by this experience I later attended workshops in the holidays, where we shot a short film or renewed a playground, we also went to summer camps in Naturefriendhouses far from civilization. We played baseball, built dams in the nearby river or hiked to a nearby lookout.

After living a decade in Frankfurt I moved to a small town in North Rhine-Westphalia.  The first few years I made a break with Naturefriends. In the meantime I played handball, learned how to play the piano and took drawing lessons in the evening education center with my sister.

She was the one who started to go to Naturefriends again and dragged me to some events too. After the two-week summer camp in Sweden, I was back again. I went to more and more events and so eventually I was sailing on the north sea, camping under plain sky, joining the federal council, writing articles in the members’ magazine and became a trainer myself.

Due to Naturefriends, my interest in politics grew and so I showed up at Fridays for Future demonstrations, joined the organization team in my home town for a short time, visited different local parties and helped friends to establish a youth party.

After finally finishing my A-levels, I found my way to IYNF. Now I am excited to plan international activities, meet other young activists from different countries and have fun.